My Poem in 'Death to the World' 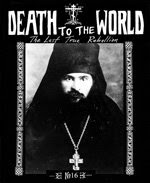 Years ago, when I first became interested in Orthodoxy, I discovered this little 'zine produced by monks of the St Herman of Alaska Brotherhood in California. Intended as an outreach to punks and other counter-culture kids, it was called Death to the World. The 'zine featured striking, cut-and-paste black-and-white images of monks, saints, and icons, along with excerpts from spiritual writings, ancient and contemporary, many of them focusing on the meaning and redemptive power of suffering. Inspired by Death to the World, I wrote a little poem (along with a DTTW-type page layout) that a friend of mine put in a little 'zine he made.

Well, years later I discovered that while the monks had eventually stopped printing new issues, a group of young converts in Orange County had received their blessing to start it up again, and these kids were asking for submissions. I told them about my own DTTW-inspired poem and sent it in. I initially received an enthusiastic reply, but never heard back from them again after that. Then a year or so later, a friend told me he'd seen my poem in there, and a couple of months ago, I myself finally saw it (Death to the World, #16, p. 37).

Since I only e-mailed the text and didn't send my layout in, the DTTW staff did their own, cutting out the lines and pasting them over an image of the fathers processing out of the monastery church at Platina. It's nice. My only complaint is that they switched two of the lines around, probably when they were arranging them on the page. Anyway, keeping in mind that I wrote this when I was still technically a teenager, here is the full text of the poem with all of the lines in proper order.

I turned off my tv today.
I sold my circuits.
I flung away my flickering neon lights.
I took the wires out of my skin and off of my clothes.
I stripped machine images and bar codes away from the walls.
I took off mirror shades.
I cried.
Tonight flickering flame illumines Your evening eyes,
Your hollow face,
Formed by lines which extend into infinity.
I bow, I kiss the wood,
I make signs and symbols in the air,
I chant in gladsome light.
Holy, Holy, Holy, Your little song,
Your eulogic hand,
Your midnight voice like a sword.

Not your typical emo teenage poetry.

No, but of course I'd written reams of emo stuff before this! I suppose part of the point is I was consciously trying to be LESS emo...