Catullus, Lovecraft, and the Effect of Allusions on Reading 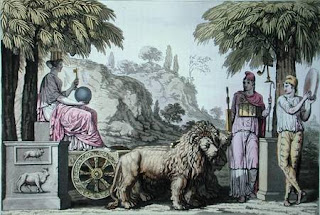 When I was about eleven years old, I discovered H.P. Lovecraft. I have forgotten how it happened now, but I was already attracted at that time to horror literature and books about monsters and ghosts, so I probably just came across a reference to him somewhere and decided to check him out. Anyone who has the slightest familiarity with Lovecraft’s writings will know that the prose and many of the historical and literary references are going to be right over the head of an eleven-year-old, even an intelligent and bookish one. But I plowed my way through nevertheless, probably quadrupling my vocabulary over the course of a year or two.

Well, it’s been years now since I read much Lovecraft, but yesterday I picked up an anthology I own of some of his most famous stories (he specialised in the short-story format), and came across an interesting reference. In the story, ‘The Rats in the Walls’, about an American scion of an old English family who buys his ancestral estate and sets about renovating it, the protagonist discovers a Roman inscription that reads, ‘L. PRAEC . . . VS . . . PONTIFI . . . ATYS. . . .’ He then notes:

The reference to Atys made me shiver, for I had read Catullus and knew something of the hideous rites of the Eastern god, whose worship was so mixed with that of Cybele. (The Best of H.P. Lovecraft: Bloodcurling Tales of Horror and the Macabre [NY: Del Rey, 1982], p. 23)

Now this is typical Lovecraft: an allusive reference that tells you just enough to be uneasy and curious. I think what it suggested to me when I was 11 and had never heard of Atys or Catullus or Cybele was that these pagan figures and their cult were much like the diabolical creatures and their villainous minions in Lovecraft’s own stories—hideous things of which the average person knew nothing.

But when I reread that passage yesterday, I knew of Catullus and Cybele (though I couldn’t recall Atys), and what is more, I knew something about the ancient pagan world generally. This time, I went to my bookshelf, found a Riverside edition of Latin poetry in verse translation, looked up Catullus in the table of contents, went to poem number 63 (the one that concerns Atys), and read it.

I won’t go into the details of who precisely Atys is (other than to point out he’s an attractive young demigod, not a grotesque Lovecraftian monster), but the point is that in the narrative of Catullus’s poem, he becomes so ecstatic in his worship of Cybele that he castrates himself:

And there in a frantic fury, as one whose sense has flown,
He robbed himself of his manhood with an edge of sharpened stone.

Then Atys and a group of ‘Gallae’ (self-castrated worshippers of Cybele) go processing in ecstasy up the slopes of Mt Ida to a grove sacred to Cybele. Furthermore, it turns out that’s what male devotees of the ‘Great Mother’ typically did in the ancient world. The cults of Cybele and Atys were fairly common at that time, having originated in Asia Minor, spread to Greece, and thence to Rome and throughout the empire. It’s true that their rites are ‘hideous’, but it seems to me that they are typical of the more irrational cults of antiquity. Indeed, I would think anyone familiar with the worship of Dionysus in Euripides’s Bacchae, wherein a woman murders and dismembers her own son while in a trance, would find Catullus’s poem quite tame by comparison.

Anyway, I thought it all an interesting example of how knowledge of context and familiarity with specific allusions can effect one’s reading of a text. As a schoolboy, it was all so mysterious to me that I found it really exciting. Now, although I’m still fascinated by such things, it doesn’t seem bizarre enough to have the same effect. I certainly doubt that a reference to Atys in an inscription, even in a spooky old house, would ever make me shiver.
Posted by Aaron Taylor at 3:49 PM