On Orthodox Native Americans & the Eating of Fish 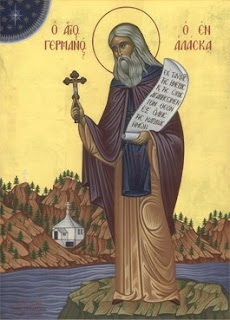 Well, as nearly everyone else in my part of the world prepares to celebrate Christmas with the Pope of Rome, I have just finished a nice salmon dinner in honour of our holy Father Herman of Alaska, the 'North Star', according to one children's book about the Saint. A hesychast and anchorite, he was also, paradoxically, a great missionary and an example of active, incarnate love. His feast is tomorrow, 12 December, according to the old Orthodox calendar.

I think it was when I moved to Greece that I first began truly to appreciate St Herman, the 'adornment of Alaska and joy of all America' ('Akathist to Our Father Among the Saints, Herman, Wonderworker of Alaska', Book of Akathists: To Our Saviour, the Mother of God, and Various Saints [Jordanville, NY: Holy Trinity Monastery, 1994], p. 231). There, a stranger in a strange land, I became suddenly attached to the greatest Saint of my own country. When a couple of guys were coming from the States to stay with us and asked if there was anything they could bring, I asked for an icon of St Herman (I got a nice, good-sized reproduction of the original icon from the St Herman of Alaska Monastery in California). I eagerly read the account of the reception of St Herman's relic (in one of the coolest reliquaries I've seen!) at the Holy Monastery of the Annunciation in Ormylia, Greece, as well as the two homilies on the Saint by Elder Aimilianos of Simonopetra translated by Fr Alexander (Golitzin) in The Living Witness of the Holy Mountain: Contemporary Voices from Mount Athos (South Canaan, PA: St Tikhon's Seminary, 1999), pp. 221-59. Finally, I was pleased to be present when an icon of St Herman painted (and reproduced above) at the St John the Forerunner Women's Monastery in Goldendale, WA, was presented to the sacristan of Xeropotamou Monastery on Mt Athos so that the fathers there could begin to do services for the Saint (a day or two later, if memory serves me, because of the importance of St Spyridon in Greece). Although I still have yet to make the trip to Alaska to venerate St Herman’ relics, when I moved back to the US, I was blessed with the opportunity to make a pilgrimage to St Herman of Alaska Monastery in California. There, I was given a copy of the Akathist to St Herman which, according to a note in the back, was originally written in 1951 by Fr Steven Lyashevsky, a friend of Archimandrite Gerasim of Spruce Island. The Akathist was later enlarged, presumably by the St Herman of Alaska Brotherhood themselves (Akathist to our Holy and God-bearing Father St Herman, Wonderworker of Alaska [Platina, CA: St Herman Press, n.d.], p. 17).

Anyway, there is very little I can add to what has already been said about St Herman. There is, however, a legacy to his work with the natives of Alaska of which many might not be aware. Inspired by Alaskan Missionary Spirituality, a collection of primary sources in English, a Canadian man, Reader Mikhail Ivanovich, has been leading a project to publish online all of the Orthodox texts translated into the native languages of Alaska by the great Orthodox missionaries there. There is a fascinating interview with Reader Mikhail here in Road to Emmaus, and one can see the fruit of his pious labours at the All Saints of North America Orthodox Church site here. Making these efforts more widely known seems to me a great way to honour St Herman.
Posted by Aaron Taylor at 9:25 PM