The Erudition of Fr Florovsky 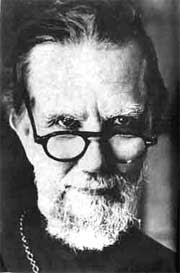 So I've started reading Part One of Fr Georges Florovsky's Ways of Russian Theology (trans. Robert L. Nichols, Vol. Five in The Collected Works of Georges Florovsky, ed. Richard S. Haugh [Belmont, MA: Nordland, 1979]), a book which I know I probably ought to have read a long time ago. Anyway, it is pretty much universally acknowledged, by friend or foe, as a work of astonishing erudition and encyclopædic learning. If I recall correctly, Andrew Blane said something in his biography of Florovsky to the effect that it was the sort of thing that no one else could have written or probably would be able to write again. Having been thus prepared, I still could not repress a chuckle when I came across the following comment on the blatant Protestantism of (one-time prefect of the Kiev Academy and later Archbishop of Novgorod) Feofan Prokopovich's (1681-1736) theological lectures: 'One frequently detects the use of Johann Gerhard's compendium Loci communes theologici (first edition Jena, 1610-1622)' (I:124). Excuse me? Did he say 'One frequently detects' the use of this book? In the pronoun sense of 'any person'? I must admit, that while I am no Lutheran, I am a graduate of the School of Religion at a Protestant university, and I have never heard of Gerhard or his compendium. So while I have also not read Feofan, had I done so it seems unlikely that I would have detected the use of Gerhard. I do not know whether Florovsky is being a bit disingenuous here (I know he was fairly young when he wrote Ways), or whether an earlier generation of philosophers and theologians could be relied upon to recognise immediately any use of Gerhard in a work of theology. But I do know that I feel I am in the company of highly erudite persons when they can make a statement like that merely in passing.
Lest you are perversely tempted by this post to learn more about this Feofan character, however, be warned that Fr Florovsky begins his assessment of the man thusly:

Feofan Prokopovich (1681-1736) was a dreadful person. . . . Feofan seems insincere even at those times when he is confiding his innermost dreams or expressing his actual views. He always wrote with a venal pen and one detects dishonesty in every part of his spiritual make-up. (I:122)

Κύριε ελέησον! Thank you for saving me from my perverse temptation to learn more about this dreadful man! ;-)

It's too bad your Protestant school didn't tell you about Johann Gerhard. He was the premier Lutheran theologian of post-Reformation Lutheranism. His Loci theologici set the benchmark against which all later Lutheran dogmatic writings were measured. He combined a warm piety with Aristotelian precision and thorough familiarity with the church fathers--Latin and Greek--in their original languages. As I recall, Gerhard's "Sacred Meditations" were translated into Russian and enjoyed some popularity in Russia. So if someone like Prokopovich had Protestant leanings, Gerhard would have probably been the most obvious theologian to borrow from. Gerhard's Theological Commonplaces are now being published in English. See www.cph.org and search for "Gerhard."

Fr Hartung> I'm glad I was able to save the soul of at least one reader!

Rev. Mayes> Thank you very much for enlightening me! Of course, now I also feel rather foolish and ignorant. ;-) All I can say is my alma mater was United Methodist, so until we reached the 20th c. (where we were supposed to fall in love with such figures as Paul Tillich), the only post-Reformation figure on the radar was Wesley!