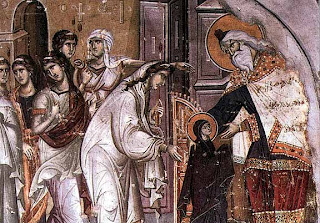 Into the holy places the Holy of Holies is fittingly brought to dwell, as a sacrifice acceptable to God. (Second Sticheron of Small Vespers, Tone 1)

Today the living Temple of the holy glory of Christ our God, she who alone among women is pure and blessed, is offered in the temple of the Law, that she may make her dwelling in the sanctuary. (Second Sticheron of Great Vespers, Tone 1)

Today the Theotokos, the Temple that is to hold God, is led into the temple of the Lord, and Zacharias receives her. Today the Holy of Holies rejoices greatly, and the choir of angels mystically keeps feast. With them let us also celebrate the festival today, and let us cry aloud with Gabriel: Hail, thou who art full of grace: the Lord is with thee, He who has great mercy. (Second Hymn at the Lity, Tone 4, by George of Nicomedia)

13. When God's high priest understood that the Maid apparently possessed divine grace above all others, he had to count her worthy of something more excellent than anyone else deserved. He led her into the Holy of Holies and then persuaded everyone to be content with what had happened. . . . She was not simply brought once into the Holy of Holies but was, as it were, taken into God's company for a period of several years, so that through Her, when the time came, the heavenly mansions might be opened and be given as everlasting dwellings to those who believe in her mysterious childbearing.

14. In this way, and for these reasons, she who was chosen from the elect of all ages, who was declared the Holy of Holies, whose body was purer and more divine than spirits cleansed by virtue, to such an extent that she was able to receive not just the form of divine words but the person of the only-begotten Word of the Father without beginning, was today justly consigned to the innermost hallowed sanctuary like God's treasure. When the time came, this treasure was to be used to enrich and adorn both heaven and earth, as indeed came to pass. (St Gregory Palamas, The Homilies, ed. & tr. Christopher Veniamin & The Monastery of St John the Baptist, Essex, England [Waymart, PA: Mt Thabor, 2009], p. 412)

But, of course, the feasts of the Church are not merely celebrations of historical events long past. They all bear direct spiritual significance for us today. Thus, St Gregory concludes:

15. Let us too, brethren, move our dwelling-place from earth to on high. Let us be changed 'from flesh to spirit', and transfer our longing from fleeting concerns to things that endure. Let us despise the pleasures of the flesh, which were invented as a bait to trap the soul, and soon pass away, and let us desire spiritual gifts which stay incorruptible. Let us raise our disposition and our thoughts from the disorder below and lift them up to the heavenly sanctuary, to that Holy of Holies hwere the Mother of God now dwells. (ibid., p. 413)

In conclusion, this feast raises a theme I’d like to look at some more in future blogs: the analogy between the outer temple and the inner one referred to by St Paul in I Corinthians 6:19, and the analogy of both with the heavenly temple, the ‘inaccessible places of Heaven’. It’s a teaching that can be traced throughout the Church’s Tradition, and one that I find utterly fascinating.
Posted by Aaron Taylor at 10:51 PM