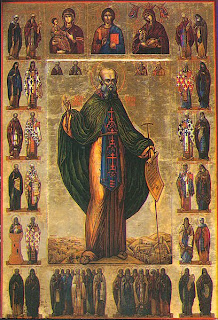 Today, 5 December, is the feast of St Sabbas the Sanctified (439-532), the great Palestinian monastic founder. St Sabbas entered a Cappadocian monastery at 8 years of age, was tonsured at 17, and, with the blessing of his abbot, left for Jerusalem with ‘a desire, pleasing to God, to repair to the holy city and live in solitude in the neighboring desert’ (Cyril of Scythopolis, The Lives of the Monks of Palestine, trans. R.M. Price [Kalamazoo, MI: Cistercian, 1991], p. 98). Although St Euthymius the Great did not accept him to live in his lavra, he sent him to the cœnobium of Elder Theoctistus, where St Sabbas gradually acquired more solitude and even came under the spiritual guidance of St Euthymius himself, who called him the ‘boy elder’ (Cyril, p. 103).

After the repose of St Euthymius, about whom Derwas Chitty writes that he ‘continued to reign from his tomb over the wilderness’ (The Desert a City: An Introduction to the Study of Egyptian and Palestinian Monasticism Under the Christian Empire [Crestwood, NY: St Vladimir’s Seminary, 1995], p. 97), St Sabbas (at the age of 35) went into the Judaean desert and ‘devoted himself to solitude, fasts and ceaseless prayer, making his mind a spotless mirror of God and the things of God, in accordance with the saying, “Be still and know that I am God” [Ps. 45:11 LXX]’ (Cyril, p. 104). After four years in the desert at Roubâ, St Sabbas relocated to a cave in a gorge near Siloam, where—

he spent five years alone by himself in solitude, conversing with God and purifying the eye of his thought so as “with unveiled face to behold as in a mirror the glory of the Lord,” since the evil spirits had already been conquered by his ceaseless prayers and nearness to God. (Cyril, p. 108)

It was only then, at the age of 45, that St Sabbas was ‘entrusted by God with the charge of souls’ (Cyril, p. 108). The Great Lavra was founded (there is a nice story in Chap. 20 of Cyril’s ‘Life’ about how St Sabbas accepted Armenians ‘because of their piety’, and let them have their own services in their language [Cyril, p. 114]), the New Lavra was built, more monasteries were established, and finally our holy Father was ordained at 53 and made archimandrite of the anchorites of Palestine. The typikon of the Great Lavra, now known as 'Mar Saba', is attributed to him (and may retain ‘reminiscences’ of St Sabba’s own Rule [Chitty, p. 117]), as well as the liturgical typikon still followed in the Russian Church and many of the Greek monasteries (see Mother Mary and Archimandrite Kallistos [Ware], trans., The Festal Menaion [South Canaan, PA: St Tikhon’s Seminary, 1995], p. 541-3).

Having been warned in a vision of the time of his death, St Sabbas received the holy Mysteries, and, saying the words, ‘Lord, into thy hands I shall commit my spirit’ (Cyril, p. 191), fell asleep in the Lord in 532 (Chitty, p. 213). Although his relics were stolen by the Crusaders and taken to Venice, they were returned in the last century in an ecumenical gesture and can still be venerated at the monastery he built. Chitty closes his account of St Sabbas with the troparion for his feastday:

By the channels of thy tears
Thou didst cultivate the barrenness of the Wilderness:
And by thy groanings from the depth
Thou didst bear fruit of thy toils an hundredfold;
And becamest a light unto the world,
Shining with miracle,
Sabas our father holy.
Intercede unto Christ our God
For our souls’ salvation. (Chitty, p. 118)

Interestingly, monks of the Great Lavra found themselves in Rome in the wake of the Persian plunder of the monastery in the seventh century (and perhaps at the same time that St Theodore of Canterbury had been driven to Rome from the East), and received shelter in some cells on the Aventine near the estate of Silvia, mother of St Gregory the Dialogist. Here, they built a basilica dedicated to ‘San Saba’ that still stands, and established a Greek monastic brotherhood that lasted until the 11th century, when they were replaced by Benedictines of Cluny (Rodolfo Lanciani, The Golden Days of the Renaissance in Rome, From the Pontificate of Julius II to that of Paul III [Boston: Houghton, Mifflin & Co., 1906], p. 50; according to a certain reference website, however, they were replaced in the 10th century by Benedictines of Monte Cassino, and after the Cluniacs, by Cistercians and later Jesuits [gasp!], but it's 2 am and I can find no other source to back this up).