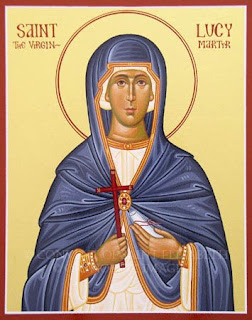 Today we commemorate the Virgin Martyr, St Lucy of Syracuse, Sicily. According to the Prologue:

With her mother, Lucy visited the grave of St Agatha in Catania, and the saint appeared to her. Her mother [Eutychia], who had an issue of blood, was miraculously cured in the church at that time. Lucy gave away all her goods to the poor, and this embittered her betrothed, who denounced her to Paschasius the judge as a Christian. The wicked judge ordered that she be taken to a brothel and defiled, but, by the power of God, she remained immovable, as if rooted to the earth, and not even a vast number of people was able to move her from the spot. An enraged pagan then ran her through the throat with a sword, and she commended her soul to God and entered into the Kingdom of eternity. She suffered in the year 304.

Although her entry in the Catholic Encyclopedia is skeptical concerning much of this story, even there it is admitted that ‘the place and time of her death can hardly be questioned’, and the author is rather optimistic about the factuality of ‘her connexion with St Agatha and the miraculous cure of Eutychia’! ;-)

There is a tradition that she used to visit Christians in the catacombs wearing a wreath of candles (see Gordon Giles, O Come Emmanuel: A Musical Tour of Daily Readings for Advent and Christmas [Brewster, MA: Paraclete, 2006], p. 50), and this coupled with her name, ‘Lucia’, meaning ‘light’, gave rise to the prominent rôle of light in some of the more well-known customs associated with St Lucy’s day in the West. In Italy, she is celebrated with torchlight processions and bonfires. In Sweden, there is the famous custom of the oldest daughter dressing in a white gown and, crowned with a wreath of greenery and lit candles, waking the family to serve them St Lucy day treats. (For these customs, and recipes for the special foods of her day, see the Fish-Eaters page.)

Of course, St Lucy is also known for the recurrence of her name in the traditional Neapolitan song, ‘Santa Lucia’, made famous by Enrico Caruso. The lyrics concern a harbour in Naples called ‘Borgo Santa Lucia’, which is dominated by Castel dell’Ovo, a site that may once have been that of a Greek monastery in the fifth century. Gordon Giles has printed one of the many versions of the song re-written as a hymn for the Saint. The second verse reads:

A complete Akolouthia of the Virgin Martyr can be found here.
Posted by Aaron Taylor at 1:16 AM

May I inquire as to where you found this icon. My wife and I recently chose the name Lucy for our daughter and are having a hard time finding an orthodox icon for her. Thank you for any guidance you can provide!!

At the website of the Convent of St Elizabeth the New Martyr in Etna, CA. They have 3 to choose from, which can be ordered in prints of various sizes. Scroll down the list to 'St Lucy' here to see them. The sisters have icon prints of many Saints for sale.