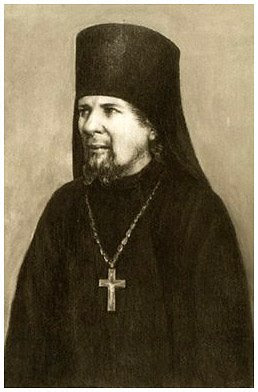 Today, 29 April on the Church’s calendar, we celebrate the memory of St Nektary (1853-1928), the last elder of Optina Pustyn’. Rather than produce another account of a Saint’s life for today (Bishop Alexander of blessed memory has a page with the Life and teachings of the Elder here), I thought I would simply post the little review in my reader’s journal of the St Herman biography: Ivan M. Kontzevitch, Elder Nektary of Optina (Platina, CA: St Herman of Alaska Brotherhood, 1998).

Begun by the late Fr Seraphim (Rose) of blessed memory, the publications of the St Herman of Alaska Brotherhood are some of the most important Orthodox books in the English-speaking world. Although at various times (and particularly in recent years) the fathers of Platina have occasionally broadened their scope, for over thirty years, they have laboured diligently to translate and publish the great heritage of Russian Orthodoxy, the spiritual fruits of St Paisius (Velichkovsky) of Niamets and his heirs, the Optina elders, a number of whose spiritual children later became great leaders in the Russian Church Abroad (Archbishop Andrei of Novo-Diveevo and the Kontzevitch brothers—Ivan M. Kontzevitch and Bishop Nektary of Seattle, who was named for the elder—are the main ones known to me). Illustrated profusely, supplemented generously with prefaces, appendices, notes, and indices, their books bring the spiritual world of late 18th-, 19th-, and early 20th-century Russian Orthodoxy vividly to life for the modern ‘seeker of truth’, as they like to call him. These books—and the wonderful series of lives of Optina elders foremost among them—are definitely treasures of the spiritual life.

St Nektary was the last of the Optina elders, and in many ways, one of the most unusual. A sometime fool-for-Christ as well as a great ascetic and clairvoyant, he endured the hardships of the early years of the revolution and civil war, and died in exile from his beloved Optina skete, prophesying still worse horrors and trials yet to come for his many spiritual children in Russia. Yet through it all, one discovers in Elder Nektary one of the most delightful of the elders, whose touching simplicity many readers will at times find quite humourous. This book presents many wonderful glimpses of his childlike love and amazing spiritual gifts through the vivid accounts of many who knew him intimately or were blessed to have had some contact with him. A thick volume, it is filled with all of the material which could be gathered, including the prima vita written by Ivan Kontzevitch, a spiritual child of the elder whose life’s work was to pass the Optina heritage on to the next generation of Orthodox. A particular favourite of mine was the account by Archpriest Sergei Schukin, who later served the Church Abroad in Canada, as I consider it to be one of the most fascinating explanations of the nature of an elder’s advice I’ve ever read:

...We entered the reception room in the Elder’s little house. There were ten or twelve of us, men of various callings. After a few minutes of waiting a small, slightly stooped old man with a small gray beard and wearing an epitrachelion came through the door with quick, inaudible steps. After praying before the icons he blessed us all and began to come up to each one in turn. We stood in a line lengthwise across the room, and the Elder passed from one to another and spoke with us. The conversations were short; Fr Nektary rarely lingered with anyone. Interrupting the occasionally long stories of his visitors, he hastened with an answer; his replies were quick and not verbose, after which he immediately moved on to the next one in line.

I was struck more than anything by the manner in which Fr Nektary conversed with everyone: he walked up to the person with whom he was speaking and, without looking at him, stood somewhat sideways near him, half-turned, and inclined his ear to him, as if he were either hard of hearing or was simply giving the speaker an opportunity to state his needs without speaking too loudly. Listening to him, Fr Nektary gazed somewhere downward, but gave the impression that he was listening to you not with his ear, but with some other organ of perception; that, in fact, it was not your words themselves that were important to him, but something else, concealed in your soul, that the Elder was trying to perceive....

When Fr Nektary came up to me I began, as briefly as possible, to explain my situation to him; but, as often happens in such instances, my brevity was not accompanied by clarity. I endeavored to explain myself better; but the Elder, having already understood me somehow, himself began to speak. As I have already mentioned, my difficulty lay in the kind of work to choose, and by what to be guided in the process. Fr Nektary answered me roughly this way (I don’t remember his actual words, but this is the sense of them):

‘Yes, yes, of course you should work...after all, you’re an educated man. Only don’t chase after anything big...step by step, take it easy....’

That was it—and he moved on to the next person. At first it even seemed to me that I hadn’t received any kind of answer to my needs; or rather, I had expected something more from the Elder than these simple words....But I remembered that elders very often don’t answer directly, but allegorically, compelling one to ponder the true meaning of the answer. Indeed, reflecting further on his reply, I soon became convinced that I had received an entirely clear and definite answer to my uncertainties. Once I had understood this, I instantly felt an extraordinary lightness, joy and peace. All the confusion and conflict of the surrounding revolutionary atmosphere ceased to exist, and my personal problems became simple and clear....

The effect of my conversation with the Elder grew even stronger within me after my return to Moscow, and remained as something that had entered solidly into my life. My whole subsequent life served as proof of the wisdom of Fr Nektary’s advice. That which happened to me after my return to Moscow revealed to me the significance of my trip to Optina to an even greater degree.... (387-9)

This is a quintessential account of the apophthegmata, the inspired ‘words’, of the elders. One can see illustrated dramatically the deceptive simplicity of the words themselves contrasted with the profound spiritual effect they have as they penetrate the disciple.

At any rate, the elders of Optina are one of the most extraordinary manifestations of the power of the Orthodox spiritual life in the last two hundred years, and these books truly will provide much spiritual nourishment to the contemporary ‘seeker of truth’, providing a glimpse of the profundity of the traditional life lived in Christ. They will perhaps be of particular interest to those of us who are spiritual sheep in the flock of the Russian Orthodox Church Outside Russia, as we stand in the direct lineage of the elders, and their life has done so much to shape the Church which has fed us.

For more on St Nektary, see this post. And here’s a cute story involving St Nektary and one of my least favourite animals.
Posted by Aaron Taylor at 11:46 AM

Thank-you again and again for this little bit of Hagiography. I've been thoroughly enjoying it here as of lately. I am not too well known to this blog, actually not all all, because I only lurk in the shadows without saying anything. I, as well, have come to appreciate St. Herman's Press and there lives of the Optina Elders. I have found them all so beautiful and telling. Like you're above mentioned "links" of this Elder, I following, Fr. Seraphim Rose's advice have always looked for theses links and have found the Kontzevitch's to be amazing men who have contributed greatly to the Optina spiritual lineage as well as by Archbishop Andrew. It is unfortunate that we only have a few of Ivans' writings in English where his "Optina Monastery and Its Era" is only written in Russian and his "Acquisition of the Holy Spirit in Ancient Russia" is out of print. A second edition came out with two-thirds of the original missing! This was unfortunate. He also had many monographs of Saints printed up in old Orthodox Word's that have never been re-printed. I find the same with Archbishop Andrew. We hear nothing about his repose or the continuation of Novo-Diveyevo and only have one work consisting of some of his homilies. If you know any more writings in this area that perhaps I've missed I'd love to know. Thank you for your work